Dead to the Spirit 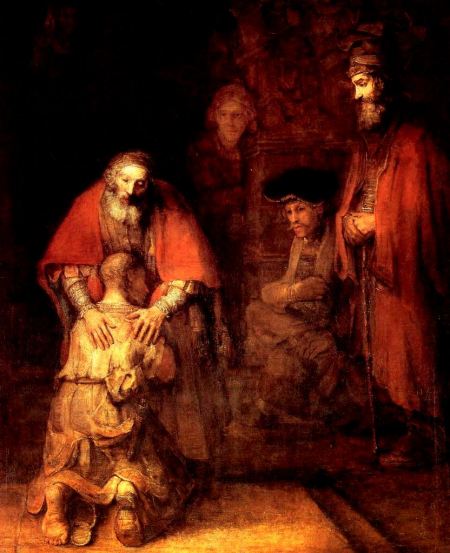 After I finished reading an excerpt from "The Prodigal God" by Timothy Keller, I realized a harsh reality that I had been taking on the guise of the elder brother. In his book, Keller undertakes dissecting the Parable of the Prodigal Son in Luke 15. For reference you may want to read the parable if you haven't read it in a while.

There are two brothers depicted here. The first being the younger brother, who leaves home to pursue a lust filled life, and the other is the elder brother, who stays at home to be near the Father. However, both brothers at the end of the story have fallen from the father. The younger comes back repentant of the life he led. He is welcomed back with loving celebration, which causes bitterness in the elder brother who feels forgotten, and neglected. The elder got stuck in the mindset that he was better for having stayed, and resented the younger brother for having been welcomed back with open arms. His own refusal to be joyful at the repentance of his brother serves as a strong parallel for the sin that has been buried deep in my own heart. I commend Keller wonderfully retelling and dissecting the parable, and allowing it to speak to the lives of believers.

There are those believers who, like myself, have been stuck on the notion that we are better, and deserve more. While some might disagree with my statement at first, I urge you to take a look at your own life. The elder brother chose to be bitter at the younger brother simply because he wasn't punished or disowned for what he did. However, what Jesus tries to illustrate for us is that the elder brother is more at fault, because his own sin has blinded him to the true salvation that comes from loving only the father. Both brothers were centered more on the assets that the father would provide, rather than the father himself. The younger brother left home, taking his inheritance before the father had died, which was the same as saying he wished he was dead. Then there is the elder brother who reacts in the end to prove that he was sticking around out of fear of doing the right thing to receive the inheritance, instead of being near because he cared for his Father.

In my own life I have been extremely bitter lately, both at home and at work towards everything. I had been taking the approach that my past performance should have afforded me some comfort, and that what others were receiving should have been granted to me, as well. I had lost the humble nature that Jesus talks about so much in Scripture. What I needed to realize was that I should not be seeking rewards for my deeds, but that I should simply be seeking after Jesus to find my place. When we find our calling and purpose in the arms of Jesus, all the other worries in this world will pale in comparison. When we base our spirituality on the things we have in this world, we get stuck on the notion that our faith is dependent on how we feel and look to outsiders. We we should let our lives "be gracious, seasoned with salt" (Colossians 4:6), so that we may have a distinct difference. This does not mean we won't react out of anger at some point, for our first reaction should not be anger, or quarreling. The exception, not the rule.

His Love is Better

Jesus loves us despite our performance, and works. He chose us not because of who we are, but He chose us simply so that His mercy and grace might be displayed in us. All the stories that I laughed at for the Pharisees' being so short sidedness and blindness to the ways of the Spirit had been happening in my life, and I could no longer accept that life I had been leading anymore. I got lost in the circumstances of my job, my life, and the unstableness of everything in general. I was seeking my own direction, since God wasn't providing, and I ended up more jaded than I had ever been before. Being dutiful to the Word out of fear does not have the same heart-changing attitude as being joyful in it. Plus when seen by an outside individual, the first tends to be a stopping point for wanting to know more about Christ.

I will leave you with this quote from Keller's book. "If you know you are sick you may go to a doctor; if you don't know you're sick you won't—you'll just die" (pg. 66). The same held true for me. I didn't realize I needed to change, and it wasn't until I started looking at all the outcomes in my life that I wanted to change and needed to seek after Jesus who could heal me.

CDO of Hounder and Owner of Huffernickel. He is a Christian, husband, father, writer, developer, designer, and a digital carpenter crafting amazing web experience. Also created the Centurion Framework many moons ago.

Why not let it come from me?

There is only one thing that I like more than writing and that is sharing what I have written with the amazing people on my newsletter list. So why not join the newsletter mailing list today and I promise you will get the latest writings I have.